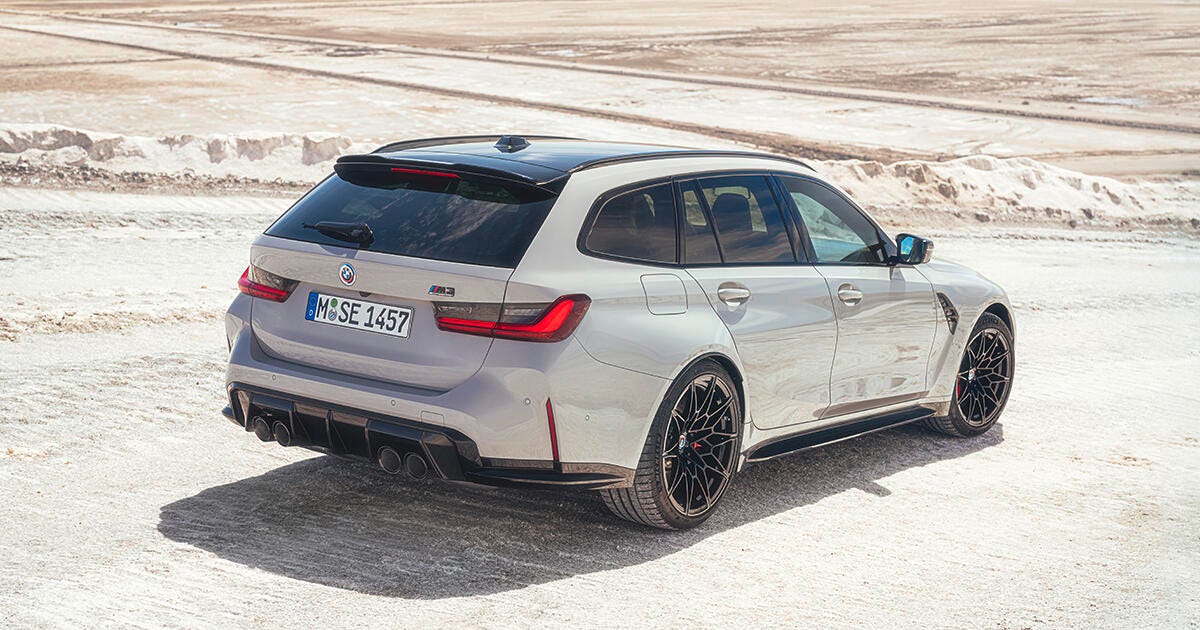 BMW’s M3 wagon is finally here. The new M3 Touring is the first time BMW has officially made a longroof M3, despite competitors like the Audi RS4 and Mercedes C63 being available in wagon form for multiple generations. Sadly, the M3 Touring won’t be available in the US, but we’re drooling over it nonetheless.

The M3 Touring is based off the Competition version of the M3 sedan. Its twin-turbo, inline-six engine puts out 503 horsepower and 479 pound-feet of torque, matching the sedan, with power being sent to all four wheels through an eight-speed automatic transmission. The xDrive AWD system recently became available across the M3 and M4 lineups, and like on those cars, the M3 Touring has a rear-wheel-drive mode that disconnects the front axle.

BMW says the M3 Touring weighs about 187 pounds more than the sedan, and there is wagon-specific underbody bracing to make the body and chassis stiffer. The adaptive dampers and steering have unique tuning, and carbon-ceramic brakes are available. The M3 Touring will hit 60 mph in 3.6 seconds, just 0.1 second off the M3 sedan, and it’ll reach a top speed of 155 mph — or 174 mph if fitted with the optional M Driver’s Package.

In terms of styling, the M3 Touring looks pretty much as we expected. It shares its huge kidney grilles, wide fender flares, quad exhaust tips, and aggressive bumper and diffuser designs with the M3 sedan. Wagon-specific changes are a larger rear spoiler, painted roof rails and a standard gloss-black roof, though the roof can be optioned in body color. Nineteen-inch wheels up front and 20s in the rear are standard, and the Touring is available with stickier track tires.

BMW’s divisive carbon-fiber bucket seats are optional for the first row of seats, but there’s no equivalent option for the second row — the M3 Touring just has the same split-folding rear bench seat as the regular 3 Series Touring. The window on the tailgate can open separately to access the cargo area, a neat trick that BMW has kept around. The Touring is the first M3 to get BMW’s new curved display, which combines a 12.3-inch gauge cluster and 14.9-inch touchscreen into one panel running the latest iDrive 8 system; this will soon be standard on the M3 sedan and M4 coupe and convertible.

The M3 Touring will make its dynamic debut at the Goodwood Festival of Speed in the UK later this month. Order books will open in September, with the M3 Touring set to start production in November alongside the M3 sedan at BMW’s factory in Munich.